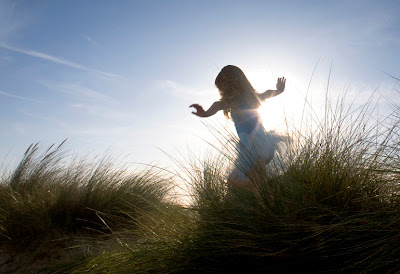 "Oh, happy time of youthful lovers, (thus
The story might begin,) oh, balmy time,
In which a love-knot, on a lady's brow,
Is fairer than the fairest star in Heaven!

To such inheritance of blessed fancy
(Fancy that sports more desperately with minds
Than ever fortune hath been known to do)
The high-born Vaudracour was brought, by years
Whose progress had a little overstepped
His stripling prime. A town of small repute,
Among the vine-clad mountains of Auvergne,
Was the Youth's birth-place. There he wooed a Maid
Who heard the heart-felt music of his suit
With answering vows.

[...]And, in their happiest moments, not content,
If more divided than a sportive pair
Of sea-fowl, conscious both that they are hovering
Within the eddy of a common blast,
Or hidden only by the concave depth
Of neighbouring billows from each other's sight.
Thus, not without concurrence of an age
Unknown to memory, was an earnest given
By ready nature for a life of love,
For endless constancy, and placid truth;
But whatsoe'er of such rare treasure lay
Reserved, had fate permitted, for support
Of their maturer years, his present mind
Was under fascination;--he beheld
A vision, and adored the thing he saw.
Arabian fiction never filled the world
With half the wonders that were wrought for him.
Earth breathed in one great presence of the spring;
Life turned the meanest of her implements,
Before his eyes, to price above all gold;
The house she dwelt in was a sainted shrine;
Her chamber-window did surpass in glory
The portals of the dawn; all paradise
Could, by the simple opening of a door,
Let itself in upon him:--pathways, walks,
Swarmed with enchantment, till his spirit sank,
Surcharged, within him, overblest to move
Beneath a sun that wakes a weary world
To its dull round of ordinary cares;
A man too happy for mortality!"