"It has been remarked that the peculiarly English habit of self-suppression in matters of the emotion puts the Englishman at a great disadvantage in moments of unusual stresses. In the smaller matters of the general run of life he will be impeccable and not to be moved; but in sudden confrontations of anything but physical dangers he is apt—he is, indeed, almost certain—to go to pieces very badly.

This, at least, was the view of Christopher Tietjens, and he very much dreaded his interview with Lord Port Scatho—because he feared that he must be near breaking point.

In electing to be peculiarly English in habits and in as much of his temperament as he could control—for, though no man can choose the land of his birth or his ancestry, he can, if he have industry and determination, so watch over himself as materially to modify his automatic habits—Tietjens had quite advisedly and of set purpose adopted a habit of behaviour that he considered to be the best in the world for the normal life. If every day and all day long you chatter at high pitch and with the logic and lucidity of the Frenchman; if you shout in self-assertion, with your hat on your stomach, bowing from a stiff spine and by implication threaten all day long to shoot your interlocutor, like the Prussian; if you are as lachrymally emotional as the Italian, or as drily and epigrammatically imbecile over inessentials as the American, you will have a noisy, troublesome and thoughtless society without any of the surface calm that should distinguish the atmosphere of men when they are together. You will never have deep arm-chairs in which to sit for hours in clubs, thinking of nothing at all—or of the off-theory in bowling. On the other hand, in the face of death—except at sea, by fire, railway accident, or accidental drowning in rivers; in the face of madness, passion, dishonour or—and particularly—prolonged mental strain, you will have all the disadvantages of the beginner at any game and may come off very badly indeed. Fortunately death, love, public dishonour and the like are rare occurrences in the life of the average man, so that the great advantage would seem to have lain with English society; at any rate before the later months of the year 1914. Death for man came but once: the danger of death so seldom as to be practically negligible: love of a distracting kind was a disease merely of the weak: public dishonour for persons of position, so great was the hushing-up power of the ruling class and the power of absorption of the remoter Colonies, was practically unknown.

Tietjens found himself now faced by all these things, coming upon him cumulatively and rather suddenly, and he had before him an interview that might cover them all and with a man whom he much respected and very much desired not to hurt." 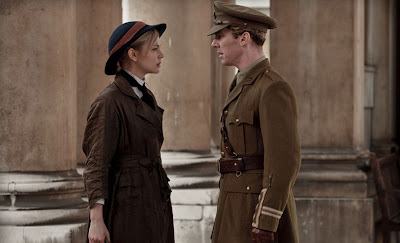 Mr Ford, just being very Austenesque at the beginning of a chapter.
Pubblicato da Alessia Carmicino a 14:11